So you’ve created fantastic content and your looking to share it via social media. Awesome! Utilizing social media is a great way to drive more traffic to your website, engage with your customers, and build your online presence. Now, to be successful, it’s important to strategize on what and when you’re posting.

Different social channels have different “peak” posting times. Let’s go over the basics, using the most popular social channels, Facebook and Twitter. I’ll explain the difference between peak vs. non-peak, the best days to post, and how to figure out the best times for you and your business.

Peak hours are the busiest hours. Meaning, there are more people actively signed into their social accounts and engaging. Non-peak hours have less active users. (I’ll be breaking down the best times to post for each social channel later on in this article.) If you already have high engagement levels, posting at peak hours is the best time to post. You’ll be reaching the largest amount of people. 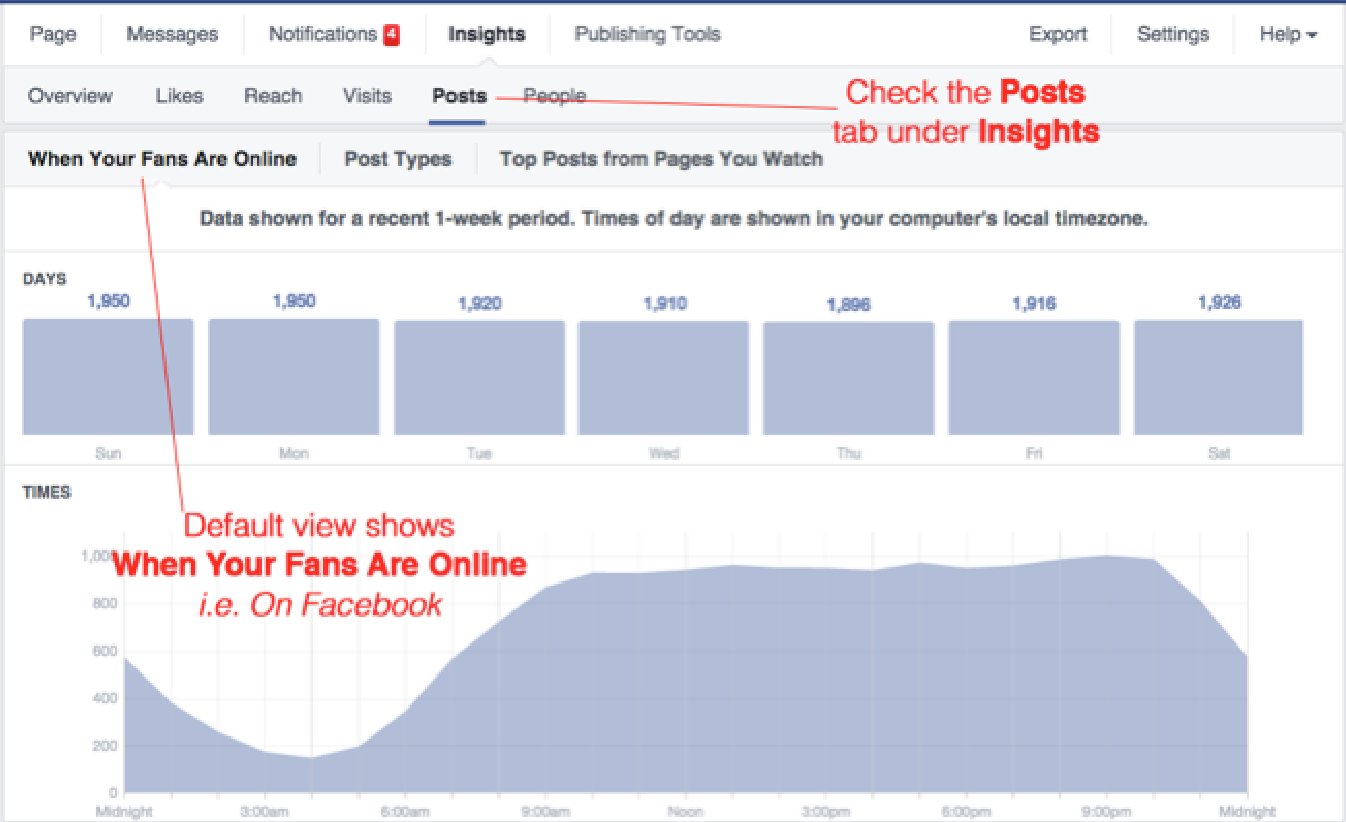 However, here’s where it can get tricky. If you’re looking to build your audience and currently have low engagement levels, it’s not always best for you to post during peak hours. Why? When there’s less content being shared, there’s less competition. Your content will have a higher chance of being seen and engaged with.

To find your own peak times, look in your Facebook Insights. Then you can test posting at peak hours AND non-peak hours, seeing which generates the best results for your business. Here’s where to look:

People engage on Facebook the most on Thursday and Friday. Turns out, people use Facebook when they’re at work – and don’t want to be. “The less people want to be at work, the more they are on Facebook.” It’s funny, but true. This aligns with the trend that people are more productive earlier in the work week and less engaged online, (socially speaking).

Friday’s have a higher engagement rate because people tend to be happier when they’re looking forward to the weekend. People share more upbeat posts and are more likely to engage with you as a result of being in a better mood. The “Happiness Index” spikes by 10% on Friday!

In a general sense, it’s best to post on Facebook anytime between 9am-7pm. Post at 1pm to acquire the most shares, and 3pm to get the most clicks. But take a look at your peak traffic times and test times for yourself!

Twitter is a whole different ball game. Depending on your business, if you’re B2B or B2C, you will have different prime posting days.

B2C (Business to Consumer) engagements and click through rates (CTRs) are highest on weekends and Wednesdays. According to report done by Salesforce, Twitter engagement for brands is 17% higher on weekends.

There’s a lot to think about when it comes to social media. With the correct strategy in place, you’ll reap the benefits social media has to offer! Luckily, we can take care of all this for you- let’s get started today!